Recently, the WRM invasive fish removal team successfully captured a large number of invasive koi-carp fish from Subiaco Common. The City of Subiaco approached WRM to catch and remove the fish after a spike in population numbers over the winter/spring months.

Most of the invasive koi-carp found in local wetlands are put there from people translocating them from their own recreational ponds. Unfortunately the koi-carp compete with native wildlife for habitat and food, and also increase the likelihood of toxic algal blooms that can impact native fauna.

By using a variety of techniques including boat-based electrofishing, fyke netting and pod trapping and trapping, WRM is able to target all size classes and put a significant dent into population numbers of invasive fish species.

WRM has now successfully removed fish from a number of wetlands around the greater Perth Metropolitan area, including the City of Swan, City of Stirling, City of Subiaco and the City of Vincent. To learn more about the services that we offer, and to get pricings on the cost of invasive fish removal, contact us at admin@wetlandresearch.com.au or here to our Brochures & Statements page to find information about the techniques we use. 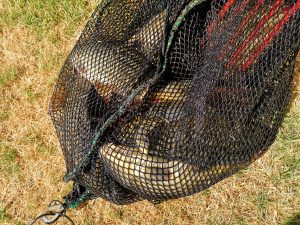