As part of the closure and rehabilitation of the Beenup mineral sands mine site, located in the southwest of Western Australia, BHP constructed a series of linked wetlands and pools from the dredging ponds and various borrow-pit areas.

These wetlands were fundamentally different to many of the natural wetlands in the vicinity of the mine site, particularly with respect to wetland morphology, habitat characteristics and water quality. Therefore, the ecological performance of the constructed Beenup wetlands could not simply be compared to natural systems in the immediate vicinity as part of the mine close-out process.  WRM was commissioned to develop a set of ecological performance indicators of health and stability of the constructed wetlands to assess rehabilitation success.

As part of this process, WRM derived ecological and water quality guideline values for a range of indicators that would be expected from natural wetlands in relatively good ecological condition in a similar biogeographical setting (i.e. reference wetlands). This was undertaken by reference to published literature on south-west wetlands, databases held by state universities, as well as WRM’s own extensive database.

WRM then undertook a comprehensive aquatic sampling program of the Beenup wetlands and used the derived guideline targets to assess performance of the wetlands and whether they could be considered stable and functioning ecosystems. 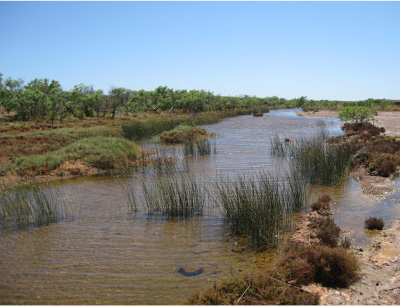 Overview of the constructed wetlands 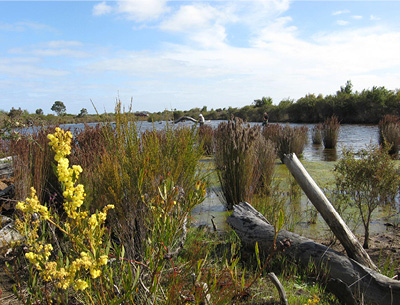 One of the constructed wetlands, showing riparian vegetation